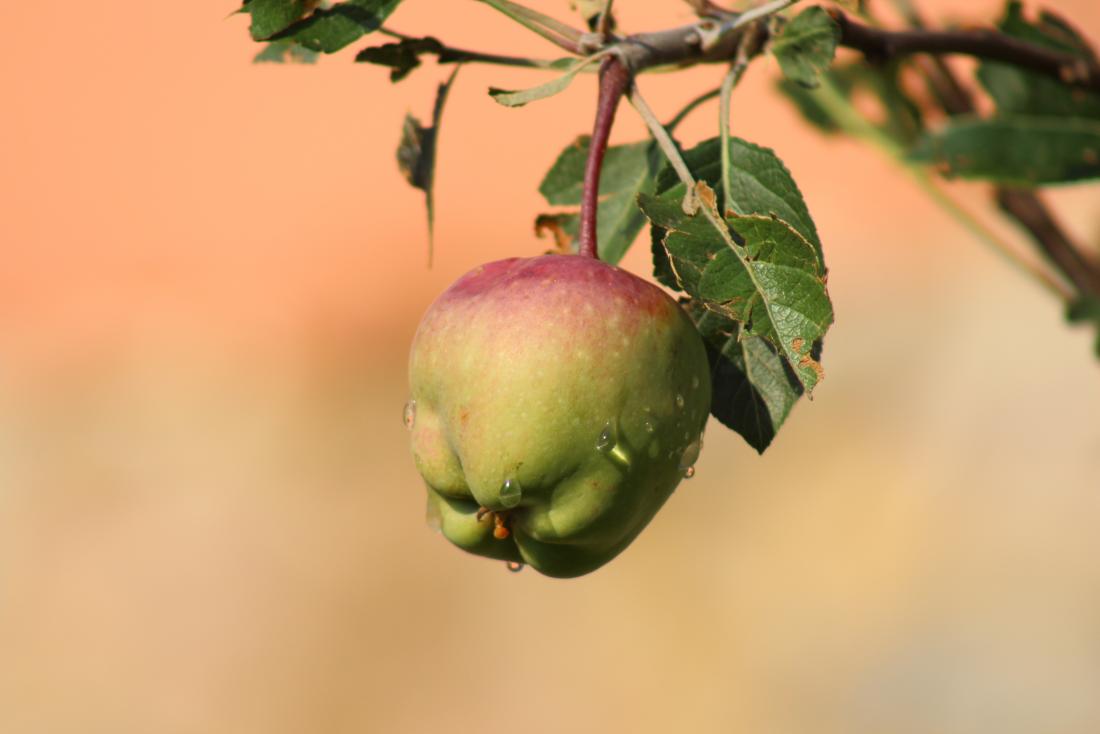 All apples have millions of bacteria, but new research finds that not all of these bacterial populations are equally healthful.

Apples are one of the most popular fruits in the world. In 2018, the United States alone produced approximately 5.13 million tons of apples, according to some statistic reports.

And in 2015, a study that appeared in the journal Pediatrics found that 18.9% of a child’s total fruit intake consisted of apples.

This much loved fruit is an excellent source of nutrients, containing vitamin C, multiple B-complex vitamins, natural antioxidants, and numerous minerals. Apples are also a good source of dietary fiber.

However, as with any other raw food, apples are also a source of microorganisms that enter the gut and colonize it. Although usually temporary, this exchange of bacteria can have implications for health.

Recently, a team of researchers from Graz University of Technology in Austria decided to find out more about the bacteria that come with our “apple a day.”

More specifically, they were interested in finding out whether there was a difference between the bacterial populations carried by organic, hand-grown apples, and those present in typical store-bought apples, which have often had more exposure to chemical fertilizers and pesticides.

The team’s findings, which appear in the journal Frontiers in Microbiology, highlight just how many bacteria a typical apple carries. They also show how the bacterial populations present in organic apples may affect the fruit’s taste and the consumer’s health.

Not all apples are equal

“The bacteria, fungi, and viruses in our food transiently colonize our gut. Cooking kills most of these, so raw fruit and veg are particularly important sources of gut microbes,” explains the study’s senior author Prof. Gabriele Berg.

However, “while recent studies have mapped [apples’] fungal content,” Berg notes, “less is known about the bacteria in apples,” and this is what formed the focus of the current study.

The researchers analyzed the bacterial content of the different components of an apple, namely the stem, peel, fruit pulp, seeds, and calyx. They did this for both organic apples and conventional store-bought apples. Then, they compared their findings for the two types of fruit.

The team found that both types of apples harbored a similar number of bacteria. “Putting together the averages for each apple component, we estimate a typical 240 g [gram] apple contains roughly 100 million bacteria,” says Prof. Berg.

The team also found that most of the bacteria were present in the apples’ seeds, and most of the remaining bacteria had settled in the pulp.

There were clear differences between the bacterial populations present in organic versus regular store-bought apples.

“This variety and balance would be expected to limit overgrowth of any one species, and previous studies have reported a negative correlation between human pathogen abundance and microbiome diversity of fresh produce,” she continues.

“Escherichia–Shigella — a group of bacteria that includes known pathogens — was found in most of the conventional apple samples, but none from organic apples. For beneficial Lactobacilli — of probiotic fame — the reverse was true,” says the senior author.

Different bacterial populations may also explain why organic apples might taste better than regular ones, according to Prof. Berg: “Methylobacterium, known to enhance the biosynthesis of strawberry flavor compounds, was significantly more abundant in organic apples; especially on peel and flesh samples, which in general had a more diverse microbiota than seeds, stem, or calyx.”

“Our results agree remarkably with a recent study on the apple fruit-associated fungal community, which revealed specificity of fungal varieties to different tissues and management practices,” adds the study’s lead author Birgit Wasserman, who is a doctoral student in Prof. Berg’s laboratory.

Looking at the current findings, the study authors suggest that researchers should repeat this analysis for other kinds of fruit to find out whether other dietary staples also differ in terms of their bacterial content based on cultivation methods.

“The microbiome and antioxidant profiles of fresh produce may one day become standard nutritional information, displayed alongside macronutrients, vitamins, and minerals to guide consumers,” says Wasserman.

“Here, a key step will be to confirm to what extent diversity in the food microbiome translates to gut microbial diversity and improved health outcomes.”

New research in mice suggests that keeping blood sugar under control using either the ketogenic diet or a diabetes drug could help treat certain cancers by boosting the efficacy of standard chemotherapy. The ketogenic diet restricts carbs to a minimum. The ketogenic diet consists of high fat foods, foods that contain an adequate amount of […]

Which is better: Bottled water or tap water?

With awareness of the environmental impact of plastic bottles increasing, more and more people are now questioning the advantages of tap water over bottled water. Some people may wonder which option is safer, or which tastes better. However, there are also a range of other factors to consider when choosing between bottled water and tap […]

Does the keto diet affect cholesterol?