Emeritus professor of medicine, Elisio Pascual, at the Miguel Hernández Univeristy (UMH) in Elche and former head of the Rheumatology Unit at Alicante University Hospital has published a research paper presenting previously unknown data that contribute to our understanding of gout as a crystal deposition disease.

The study, “Mechanisms of crystal formation in gout – a structural approach”, was published in the Nature Reviews in Rheumatology journal and lays the foundations for understanding how and where the formation of monosodium urate crystals occurs, something that has received little attention from the scientific community to date. These foundations advance our understanding of the chronic and progressive nature of gout if left untreated or treated inadequately. 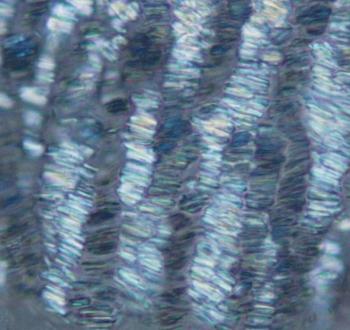 Gout manifests as acute, very painful attacks of arthritis, often in various foot joints, though also in other parts of the body. It is caused by high levels of uric acid in the blood, which crystallises and is deposited in the form of monosodium urate on the joints, tendons and surrounding tissue.

Until now the mechanisms by which the crystals form and where were unknown, as was exactly why it occurs at these specific sites. This is because the process typically used to study the tissue (fixation) caused the crystals to dissolve, meaning they are absent from the samples sent off to the pathology lab for analysis. 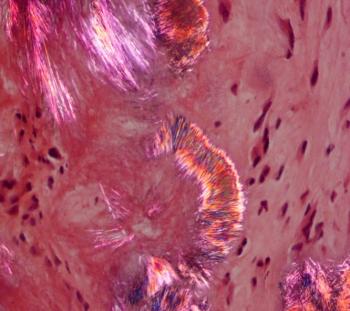 Area of a tophus where crystals appear on cellular tissue

However, if instead we use the method used for surgical biopsy (cryosection), the crystals are well-preserved and can be studied to deduce the mechanisms behind their formation. Together with recent data on crystal deposit sites obtained using ultrasonography, scientists now have a more complete overview of the crystal formation process.

The study was triggered by the observation of tiny tissue fragments containing organised deposits of monosodium urate crystals. Findings show that crystals form at the cartilage surface, as well as inside tendons and ligaments. They form on the collagen fibres (supporting fibres in organs and tissues) found in the synovial fluid around gouty joints, which are complementary in structure. Also complementary in structure are existing crystal deposits, which is what makes gout a progressive disease. The mechanisms behind biomineralisation can be used as a framework to interpret pathological crystal deposition.

These findings are important in that they change our perception of gout. Sometimes taken as an episodic disease, only present during attacks of gout arthritis, this study reveals that it is in fact the consequence of continual crystal deposition which will only increase over time if left untreated.

Elisio Pascual insists on the importance that “the general public knows that gout is a very treatable disease, even curable”, adding that “in Alicante we have made significant contributions to bring treatment into line with the reality of the disease, which we now understand a lot better”.

If you buy something through a link on this page, we may earn a small commission. How this works. Apple cider vinegar is a sour liquid made from fermented apple products. Many people believe that it is a cure-all for a variety of health conditions, including gout, and some research does suggest that it could […]

Ketogenic diet may protect against gout

What to eat and what to avoid with gout

With a healthy, low-purine diet, the outlook for someone with gout is positive. A diet that helps reduce the levels of uric acid in the body is essential and can prevent any damage caused to the joints. Other lifestyle changes that may help in the management of gout are: Maintaining a healthy weight. If necessary, […]