A large achievement gap between dyslexic and typical readers is already present at first grade and persists throughout school; therefore, it is critical to identify and provide effective interventions at the start of school, according to a report by the University of California-Davis and Yale School of Medicine.

The study is published online in the Journal of Pediatrics and in the November 2015 print issue.

According to the researchers, it is no longer acceptable to wait until a child is in third grade or later before making efforts to identify or address dyslexia.

“These new data represent a paradigm shift in how dyslexia has been perceived up to now, with current emphasis often on reading by grade three,” said senior author Sally Shaywitz, M.D., the Audrey G. Ratner Professor in Learning Development at Yale School of Medicine. “We now know that the achievement gap between typical and dyslexic readers is already present and large at first grade. Developmentally, we know that reading growth is greatest in the very first years of school. This mandates that the screening and identification of children with dyslexia occur early, even prior to first grade.”

Lead author Emilio Ferrer, professor of psychology at UC-Davis added, “If the persistent achievement gap between dyslexic and typical readers is to be narrowed, or even closed, reading interventions must be implemented early, when children are still developing the basic foundation for reading acquisition.”

Ferrer and his Yale colleagues, Bennett and Sally Shaywitz, who lead the Yale Center for Dyslexia and Creativity, conducted a longitudinal study of reading from first grade to 12th grade and beyond. The team found that as early as ﬁrst grade, compared with typical readers, dyslexic readers had lower reading scores and that their trajectories over time never converge with those of typical readers.

“These data demonstrate that such differences are not so much a function of increasing disparities over time, but instead reflect marked differences already present in ﬁrst grade between typical and dyslexic readers,” the authors write.

Implementing screening and effective reading programs as early as kindergarten offers the potential to close the achievement gap, the researchers conclude. 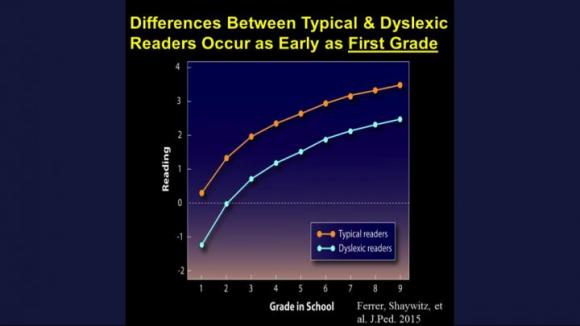 Closing the dyslexia achievement gap. This is a chart that shows there are differences between typical and dyslexic readers as early as first grade.
Credit: Shaywitz, Yale University

Dyscalculia: Burdened by blunders with numbers

Between 3 and 6% of schoolchildren suffer from an arithmetic-related learning disability. Researchers at Ludwig-Maximilians-Universitaet (LMU) in Munich now show that these children are also more likely to exhibit deficits in reading and spelling than had been previously suspected. Addition and subtraction, multiplication and division are the four basic operations in arithmetic. But for some […]

Playing in schoolyards that feature natural habitats and trees and not just asphalt and recreation equipment reduces children’s stress and inattention, according to a University of Colorado Boulder study. Working on class assignments or gardening in such settings also provide stress-reducing benefits for youth, according to a paper published in the journal Health & Place. […]

In the first known study of its kind, researchers have identified brain activity that links dyslexia to difficulty with math. The findings from the Georgetown University Medical Center study are published in the Nov. 1 issue of the journal NeuroImage, now online. People typically associate dyslexia with reading problems. However, those with dyslexia can also […]