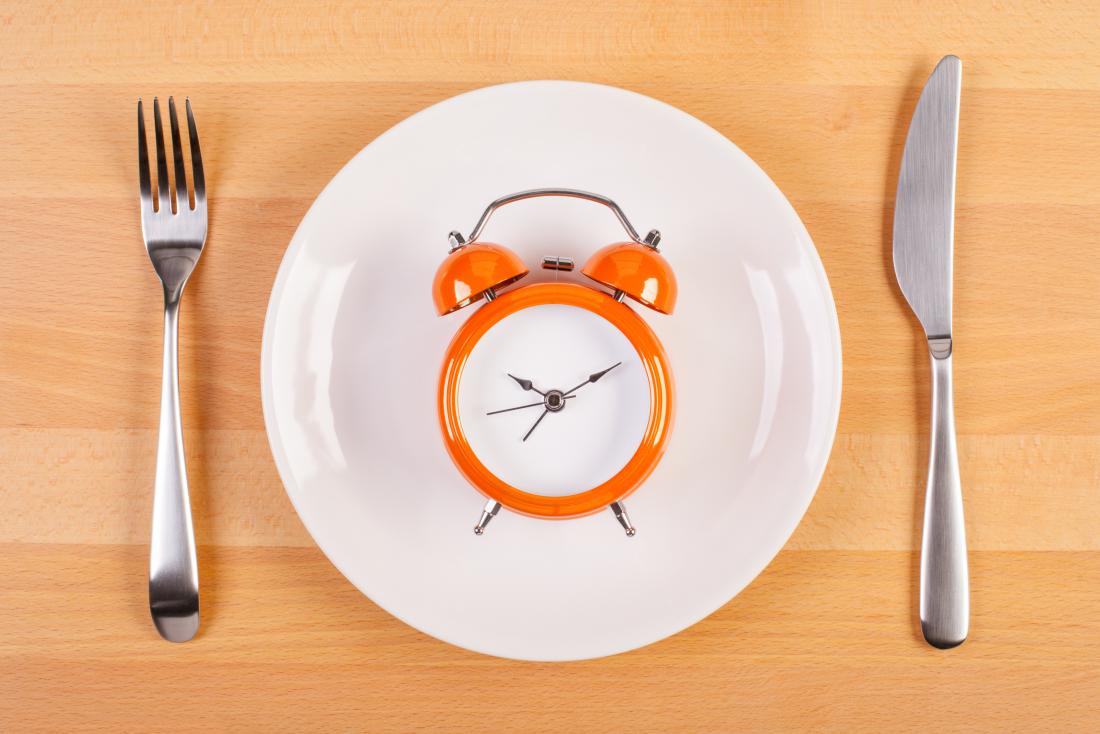 Having studied mouse models of the disease, researchers found that a strict eating schedule — which involved restricting the rodents’ food access to a 6-hour window each day — led to significant reductions in the levels of a mutant protein known to play a role in Huntington’s disease.

The study was led by Dagmar Ehrnhoefer, who worked in the Centre for Molecular Medicine and Therapeutics at the University of British Columbia (UBC) in Canada at the time.

Ehrnhoefer and her colleagues have recently published the results of their study in the journal Acta Neuropathologica Communications.

There is currently no cure for Huntington’s disease and there are no treatments that can slow its progression. Current medications can only help people to manage symptoms of the condition. A drug called tetrabenazine can help to ease chorea, for example.

Testing the effects of fasting

Huntington’s disease is caused by a mutation in the huntingtin (HTT) gene, which is inherited from a parent with the mutation.

A mutation in the HTT gene leads to the production of a mutant form of the HTT protein, which is referred to as mHTT. Research has suggested that mHTT works with other proteins to fuel the progression of Huntington’s disease.

Most studies searching for new treatments for Huntington’s disease have focused on targeting the HTT gene, but Ehrnhoefer and colleagues suggest that reducing mHTT protein levels could be an alternative strategy.

In the new study, they show how prolonged fasting each day could help to reduce mHTT levels in the brain.

The researchers came to their findings by studying mouse models of Huntington’s disease. They restricted the rodents’ access to food, so the mice were only able to eat during the same 6-hour period every day, and they fasted for the remaining 18 hours.

The study revealed that food restriction triggered a process called autophagy — cells’ self-cleaning process, in which any damaged or unnecessary components are removed — in the mice.

As a direct result of the fasting-induced autophagy, levels of mHTT in the rodents’ brains were reduced.

Furthermore, the scientists found that the mice that possessed a modified version of the HTT gene did not develop symptoms of Huntington’s disease and had higher autophagy rates. This was due to the fact that this particular version of the gene stopped the mHTT protein being “cleavable,” or from being cut in a certain region.

According to the researchers, this finding indicates that the “cleavage site” of mHTT may also play a key role in autophagy.

Overall, the team speculates that targeting the cleavage site of the mHTT protein or engaging in fasting could be two promising treatment strategies for people with Huntington’s disease.

“Our findings suggest that, at least in mice, when you fast, or eat at certain very regulated times without snacking in between meals, your body starts to increase an alternative, still functional, autophagy mechanism, which could help lower levels of the mutant huntingtin protein in the brain.”

“HD [Huntington’s disease] is a devastating disease with no cure available at this time,” adds study co-author Dale Martin, who also worked in the Centre for Molecular Medicine and Therapeutics at UBC when the research was carried out.

“More studies are needed, but perhaps something as simple as a modified dietary schedule could provide some benefit for patients and could be complementary to some treatments currently in clinical trials.”

Human enzyme may be key to unraveling Alzheimer’s disease

New research on mice finds Huntington’s disease – a hereditary, progressive disorder involving death of nerve cells in the brain – may also concern defects in skeletal muscle tissue. The finding could lead to better treatments for improving motor function, and it may also offer biomarkers for monitoring the disease without having to examine the […]

‘Helper cells’ can turn toxic in brain injury and diseases

For many years, research on neurodegenerative diseases and spinal cord and brain injury has focused on damage to nerve cells, or neurons. Now, a new study of astrocytes – a type of cell that surrounds and supports neurons – finds that there is a subtype that can turn rogue and kill neurons, instead of helping […]