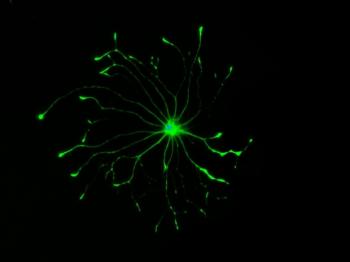 The researchers found a subtype of astrocyte that kills neurons and is abundant in various human neurodegenerative diseases.
Image credit: Shane Liddelow

The international study – conducted by a team that includes researchers from Stanford University School of Medicine in California, and the University of Melbourne in Australia – is published in the journal Nature.

The researchers suggest that the findings could lead to new treatments for brain injuries and major neurological disorders such as Alzheimer’s and Parkinson’s disease.

Lead author Dr. Shane Liddelow, of the department of pharmacology and therapeutics at Melbourne, and the department of neurobiology at Stanford, says that while astrocytes have often been described as “helper” cells, it has also been shown that they can become toxic and contribute to the damage caused by brain injury and disease by killing other brain cells.

“These apparently opposing effects have been a puzzle for some time. By characterizing two types of astrocytes this paper provides some answers to the puzzle,” he adds.

For a long time, scientists believed that astrocytes – star-shaped cells in the central nervous system that outnumbers neurons by around five to one – were simply packing cells that provide structural support to neurons.

More recently, it has become clear that astrocytes perform a wide variety of complex and essential roles in the brain and the rest of the central nervous system.

For example, it is now known that astrocytes enhance neuron survival and help to shape brain circuitry.

It is also known that astrocytes can change from benign “resting astrocytes” into “reactive astrocytes” with altered features, following brain trauma, infection, stroke, and disease.

However, what is not so clear is whether reactive astrocytes are good or bad.

In their study paper, the team describes finding a subtype of reactive astrocytes, which they call A1, that occurs in disease and injury.

A1 astrocytes ‘abundant’ in neurodegenerative diseases

A1 astrocytes appear to lose the ability to help neurons survive and grow connections. Instead, they induce the death of neurons and oligodendrocytes, the cells that help to grow the myelin sheath that insulates connections between neurons.

In further experiments, the researchers showed that blocking A1 astrocytes stopped them killing neurons.

For example, in tissue samples from Alzheimer’s patients, they found that nearly 60 percent of the astrocytes in the prefrontal cortex, a region of the brain where the disease causes the most damage, were A1 astrocytes.

Senior author Ben Barres, professor of neurobiology, developmental biology, and neurology and neurological sciences at Stanford, says that their study shows that astrocytes “aren’t always the good guys,” and concludes that:

“An aberrant version of them turns up in suspicious abundance in all the wrong places in brain tissue samples from patients with brain injuries and major neurological disorders from Alzheimer’s and Parkinson’s to multiple sclerosis. The implications for treating these diseases are profound.”

Learn how a fifth of dementia cases may be caused by air pollution.

Déjà vu in hindsight: Why we believe in false premonitions

Over years of practice, drummers appear to modify the way that the two sides of their brain communicate. According to a recent study, the cabling that runs between the two hemispheres of a drummer’s brain is significantly different from non-musicians. Share on PinterestA recent study hunts for brain changes associated with playing the drums. Playing […]