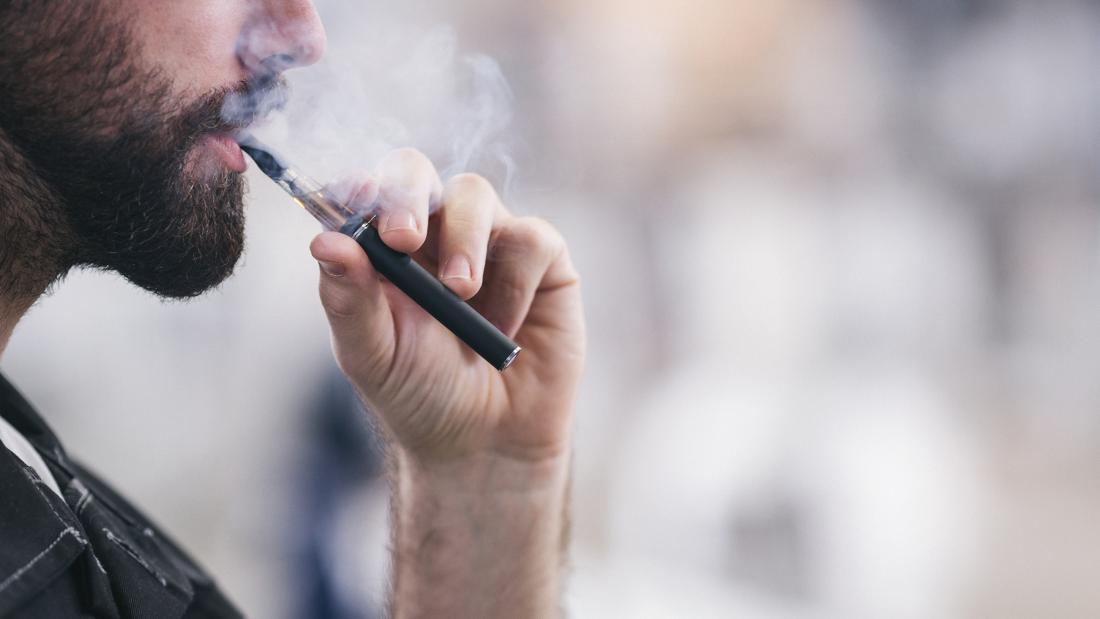 As more and more people are trying to quit smoking, electronic cigarettes (e-cigarettes) are gaining popularity.

According to the latest estimates from the Centers for Disease Control and Prevention (CDC), more than 12% of adults in the United States have tried e-cigarettes at least once in their lives, and almost 4% of U.S. adults use e-cigarettes on a regular basis.

E-cigarettes typically use electric heating to deliver nicotine through aerosolization of an e-liquid. Some studies have questioned the safety of e-cigarettes, or “vaping,” but what are the effects of vaping nicotine-free e-cigarettes?

New research, appearing in the journal Radiology, investigates this issue. Alessandra Caporale, a postdoctoral researcher in the Laboratory for Structural, Physiologic, and Functional Imaging at the University of Pennsylvania in Philadelphia, is the lead author of the study.

Caporale and her colleagues looked at the short term effects of vaping. They asked 31 healthy, nonsmoking adults with an average age of 24 years to take an MRI scan before and after using a nicotine-free e-cigarette.

The e-cigarettes contained propylene glycol and glycerol with tobacco flavoring but did not provide any nicotine. For the study, the participants took 16 puffs, which lasted 3 seconds each.

Some studies have argued that reactive hyperemia can be a good predictive measure of vascular function and endothelial function, although other researchers question its reliability.

The scans revealed reduced blood flow in the femoral artery — the main artery that delivers blood to the thigh and leg. The team also noted reduced reactive hyperemia.

Based on these measures, the researchers concluded that “inhaling nicotine-free electronic cigarette aerosol transiently impacted endothelial function in healthy nonsmokers.”

The endothelium is a thin layer of cells that lines the inside of blood vessels. A damaged endothelium means poor circulation and thick arteries. It can also potentially result in blocked blood flow to the heart and brain, which can lead to heart attack and stroke.

Specifically, the study found that the femoral artery’s dilation decreased by 34%. The peak blood flow also dropped by 17.5% after vaping, while venous oxygen levels dipped by 20%, and reactive hyperemia decreased by almost 26%.

Felix W. Wehrli, Ph.D., a professor of radiologic science and biophysics and the study’s principal investigator, comments on the findings.

He says, “While e-cigarette liquid may be relatively harmless, the vaporization process can transform the molecules — primarily propylene glycol and glycerol — into toxic substances.”

“Beyond the harmful effects of nicotine, we’ve shown that vaping has a sudden, immediate effect on the body’s vascular function and could potentially lead to long term harmful consequences.”

“E-cigarettes are advertised as not harmful, and many e-cigarette users are convinced that they are just inhaling water vapor,” says Caporale.

“But the solvents, flavorings, and additives in the liquid base, after vaporization, expose users to multiple insults to the respiratory tract and blood vessels.”

“I would warn young people to not even get started using e-cigarettes,” Prof. Wehrli states. “The common belief is that the nicotine is what is toxic, but we have found that dangers exist independent of nicotine.”

“Clearly, if there is an effect after a single use of an e-cigarette, then you can imagine what kind of permanent damage could be caused after vaping regularly over years,” the author concludes.

Taking a daytime nap once or twice a week may halve the risk of cardiovascular events, such as heart attacks, strokes, and heart failure. New research suggests that napping during the day could protect heart health, after all. This is the main takeaway of an observational study appearing in the BMJ journal Heart. Nadine Häusler, […]

According to a new study, a combination of healthful lifestyle choices, such as maintaining a healthy weight, not smoking, and regularly exercising, can significantly extend the number of years that an individual avoids disease. Share on PinterestA healthful lifestyle doesn’t just extend life; it extends disease-free life. On average, we are living longer lives; however, […]

How can mouthwash interfere with the benefits of exercise?