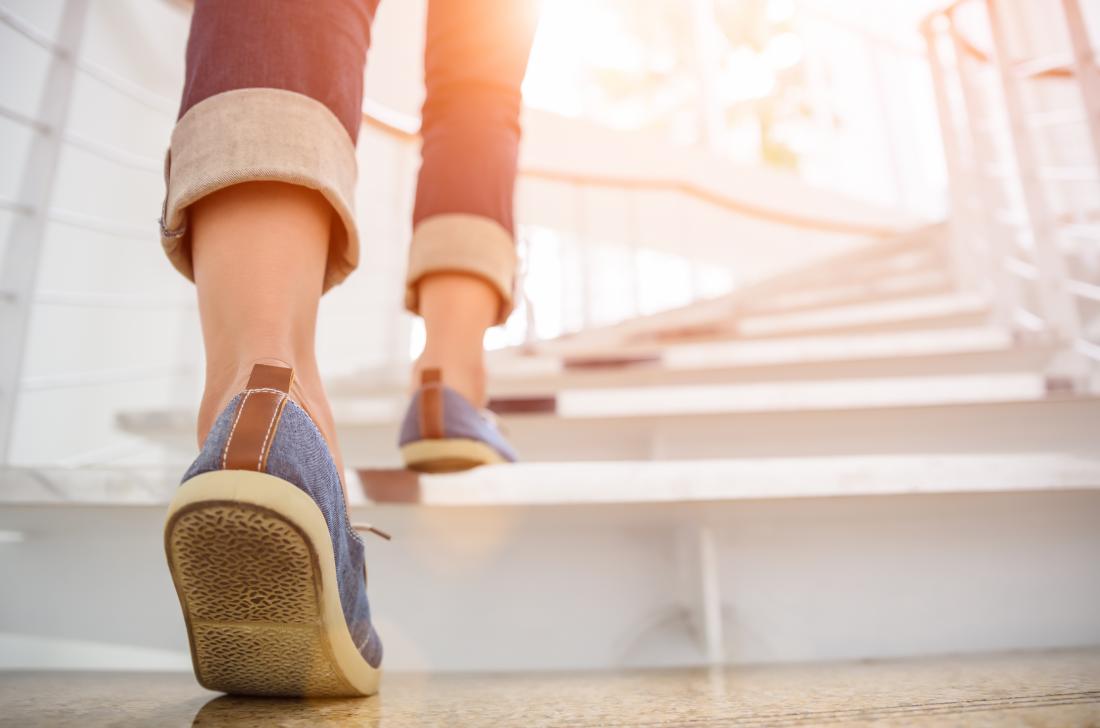 Climbing stairs can help to keep your brain healthy.

Both astronauts and people who have been bedridden for prolonged periods of time experience a lot of physical changes.

For one thing, whether it’s due to antigravity or bed rest, muscles tend to shrink. In actual fact, research has shown that restricted muscle activity affects the entire neuromuscular function.

The link between movement and the brain is known to be a strong one. For instance, we know that the brain’s motor cortex sends signals to the spinal cord in order to get specific muscles to contract.

Interestingly, when some of the brain areas responsible for movement are damaged, the brain tries to “repair” itself through neuroplasticity — that is, the neurons’ ability to remap their connections, prompting a different part of the brain to take over.

Recently, more and more research has been focusing on the effect of voluntary physical activity on brain health.

For instance, some studies have shown that exercise can induce neurogenesis — meaning that it can help the brain to form new nerve cells — as well as counter the effects that aging has on the brain’s hippocampus, which is a brain area key for memory and information processing.

The researchers were led by Raffaella Adami, of the Università degli Studi di Milano in Italy, and their findings were published in the journal Frontiers in Neuroscience.

Adami and team restricted movement in mice for a period of 28 days. Specifically, the rodents’ hind legs — but not their front ones — were immobilized. A control group of mice was allowed to move freely.

At the end of the study period, the scientists examined an area in the mice’s brains called the sub-ventricular region — which is an area key for nerve cell health, as well as being the site where neural stem cells differentiate into neurons.

The research revealed that restricting physical activity reduced neural stem cells by 70 percent, compared with the control group. Additionally, the mice whose movement was restricted had underdeveloped neurons and oligodendrocytes, which are glial cells whose main role is to protect nerve cells.

The main takeaway of the new findings is that leg exercise — weight-bearing exercise, in particular — “tells” the brain to produce healthy neurons, which are key for our ability to cope with stress and life changes.

Adami comments on the findings, saying, “It is no accident that we are meant to be active: to walk, run, crouch to sit, and use our leg muscles to lift things.”

“Neurological health is not a one-way street with the brain telling the muscles ‘lift,’ ‘walk,’ and so on,” she adds.

“Our study supports the notion that people who are unable to do load-bearing exercises — such as patients who are bedridden, or even astronauts on extended travel — not only lose muscle mass, but their body chemistry is altered at the cellular level and even their nervous system is adversely impacted.”

Study co-author Daniele Bottai, who is from the Università degli Studi di Milano, also chimes in. He says that the findings help to illuminate a wide range of other conditions, such as spinal muscular atrophy (SMA) and multiple sclerosis.

“I have been interested in neurological diseases since 2004,” Bottai goes on. “The question I asked myself was: is the outcome of these diseases due exclusively to the lesions that form on the spinal cord in the case of spinal cord injury and genetic mutation in the case of SMA, or is the lower capacity for movement the critical factor that exacerbates the disease?”

The research suggests that both of these factors might be influencing each other in such diseases.

How does your brain take out the trash?

In this Spotlight, we introduce the glymphatic system: the brain’s dedicated waste clearance system. Now implicated in various conditions, it is high time that we became acquainted. Astroglia (illustrated above) play a pivotal role in the brain’s trash collection service. Many of us are relatively familiar with the lymphatic system; it performs a number of […]

Everything you need to know about choline

If you buy something through a link on this page, we may earn a small commission. How this works. Choline is a nutrient that supports various bodily functions, including cellular growth and metabolism. The body makes some choline, but the majority comes from dietary sources. In 1998, the Institute of Medicine officially recognized choline as […]

Why are we sometimes more prone to taking risks than at other times? Researchers are looking for an answer in resting brain activity fluctuations. Share on PinterestNatural fluctuations in our brain activity could change the way we make decisions. To some extent, risk taking is a part of our daily lives. On a daily basis, […]