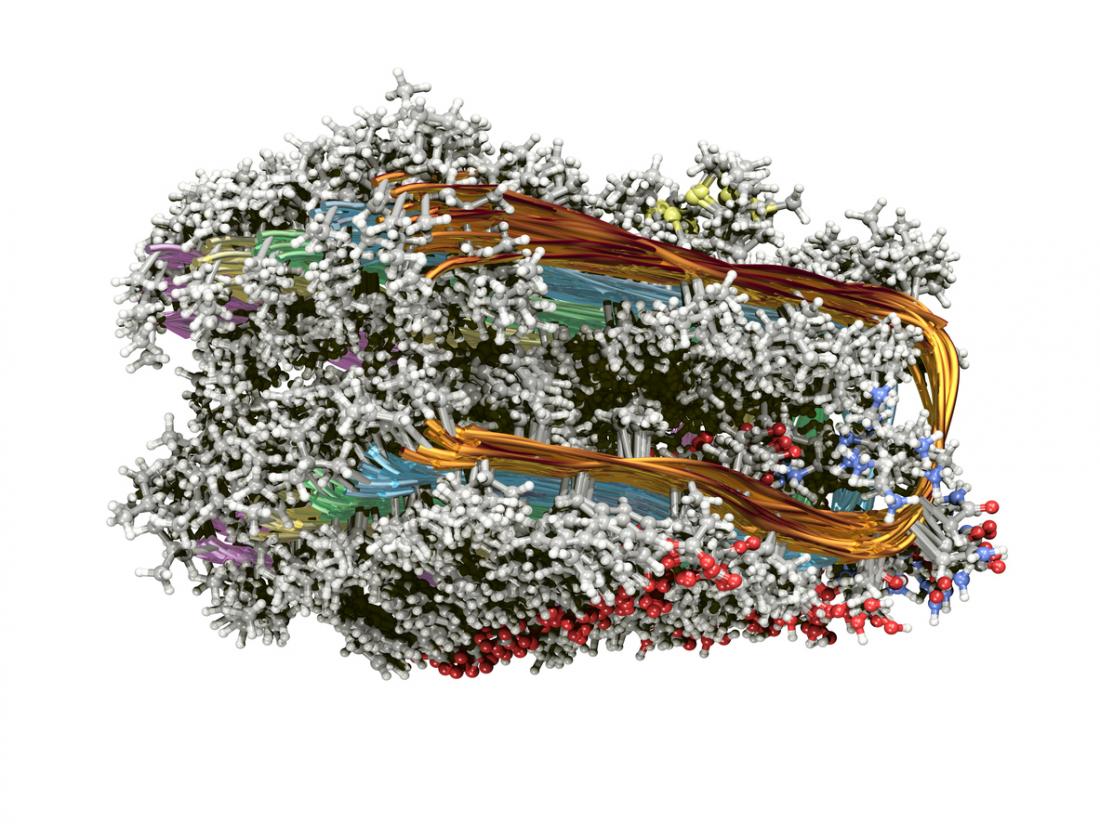 Abnormal protein buildups (shown here) are involved in a number of neurodegenerative conditions, including Alzheimer’s disease.

Neurodegenerative diseases already affect millions of people in the United States. They tend to strike in middle to later life, and, because the population is starting to live longer, the number of cases is set to rise.

By some estimates, in 30 years, there will be 12 million people in the U.S. living with a neurodegenerative condition.

Worryingly, none of these conditions have a cure. In general, treatment only focuses on addressing symptoms and slowing the progression of the disease. Consequently, many researchers are investigating potential ways to tackle them.

In short, amyloids are proteins that become abnormally folded, clump together, and form insoluble oligomers and fibrils.

The abnormal protein aggregations in neurodegenerative diseases all contain an amino acid called proline. This protein’s unique structure causes the amino acid chains to bend, thereby stacking regions of the protein together and promoting the formation of amyloid.

Recently, a team of scientists from the University of South Florida in Tampa investigated the potential of a human enzyme to interfere with the buildup of protein aggregates in neurodegenerative conditions. Led by professors Jeremy Baker, Laura Blair, and Chad Dickey, the researchers focused on the enzyme cyclophilin 40 (CyP40).

During normal protein folding, CyP40 acts as a chaperone – that is, it grabs and steers prolines to their destination, creating their distinct chain-bending formation and assisting in the development of amyloids. Specifically, prolines are found in so-called beta-turns, a hallmark of aggregates in many neurodegenerative conditions.

Although CyP40 seems to be part of the problem, as with most enzymes, it can also work in reverse; it can unbend the proteins by undoing the beta-turns, thereby unfolding the aggregates.

Using a mouse model of Alzheimer’s disease, the team found that CyP40 could reduce the buildup of aggregated tau, making it more soluble. This prevented the degeneration of neurons and reduced some of the negative cognitive consequences. Similarly, CyP40 broke down alpha-synuclein, the Parkinson’s aggregate.

Previous work has shown that this enzyme can break down aggregates in vitro, but these findings are the first time that CyP40 has been shown to disaggregate amyloid proteins in an animal model of neurodegenerative disease.

How does CyP40 work?

At this stage, it is not entirely clear how CyP40 breaks down amyloid proteins, but the authors offer two possible explanations. Either it binds directly to proline and unfolds the aggregates, or it binds to the protein before it aggregates, preventing it from clumping in the future.

The importance of these findings is clear. Although there will need to be more work done to understand the mechanisms at work, having a tool to unlock the misfolded proteins could be a game-changer in the treatment of neurodegenerative conditions.

CyP40 is not the only enzyme that could be of potential use. As Blair explains, “The finding that Cyp40 can untangle clumps of tau and alpha-synuclein suggests that it, or one of the more than 40 other human proteins with similar activity, may have a role to play in treating neurodegenerative disease.”

What really happens in the brain during a hallucination?

A person can experience visual hallucinations for many reasons, including consuming hallucinogenic substances or as a symptom of schizophrenia. But what are the brain mechanisms that explain hallucinations? New research aims to reveal more about how hallucinations manifest in the brain. The Diagnostic and Statistical Manual of Mental Disorders (DSM-5) defines hallucinations as “perception-like experiences […]

How does your brain take out the trash?

In this Spotlight, we introduce the glymphatic system: the brain’s dedicated waste clearance system. Now implicated in various conditions, it is high time that we became acquainted. Astroglia (illustrated above) play a pivotal role in the brain’s trash collection service. Many of us are relatively familiar with the lymphatic system; it performs a number of […]

3 (or more) spooky ways to trick your brain this Halloween

If you want some thrills this Halloween, you should try tricking yourself for a change. In this Spotlight, we look at some spooky experiments that’ll trick the brain and ask intriguing questions about consciousness and perception. Treat yourself to some scientific ‘spooks’ this Halloween. In Act One, Scene Five of William Shakespeare’s play Hamlet, the […]