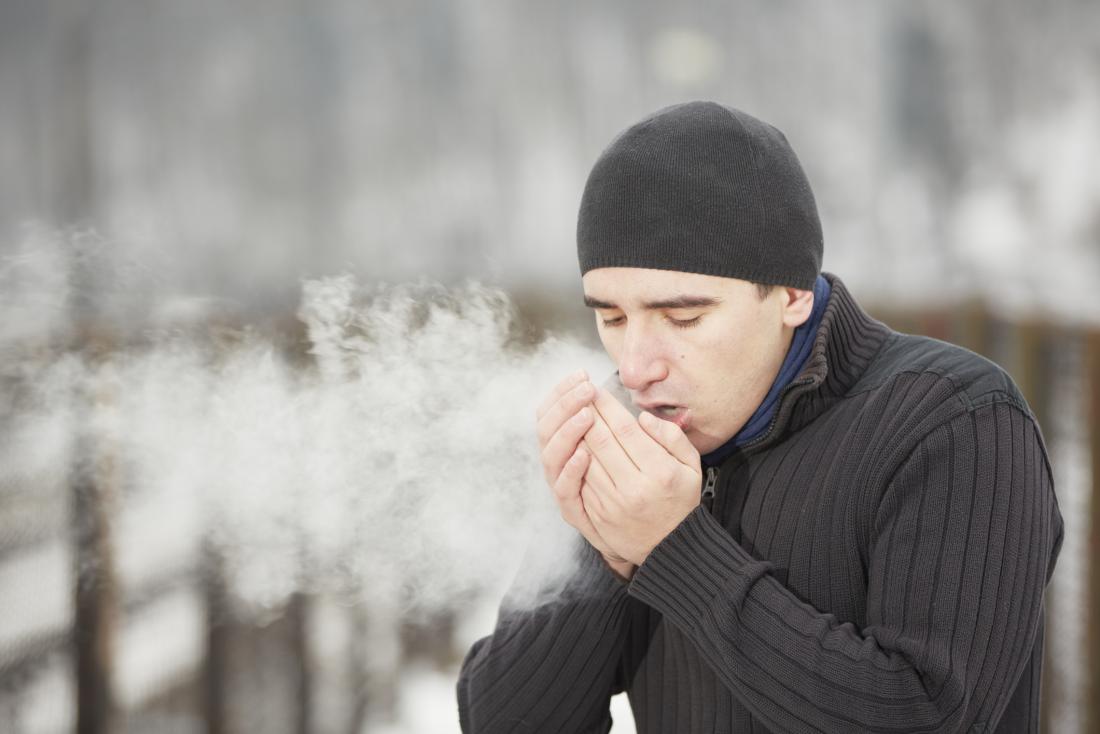 Researchers say that simply breathing out is enough to spread the flu virus.

“People with flu,” explains senior author Donald K. Milton, professor of environmental health at the University of Maryland, “generate infectious aerosols (tiny droplets that stay suspended in the air for a long time) even when they are not coughing, and especially during the first days of illness.”

The common belief is that flu is spread through coughs and sneezes from infected individuals and from touching surfaces contaminated with the virus.

However, the new study reveals that people with the flu can shed the infectious virus into the air around them just by breathing.

“So,” Prof. Milton urges, “when someone is coming down with influenza, they should go home and not remain in the workplace and infect others.”

He and his colleagues report their findings in the Proceedings of the National Academy of Sciences.

Flu, or influenza, is an infectious respiratory disease that is caused by viruses. The illness ranges from mild to severe and can lead to hospitalization and even death.

People at higher risk of serious complications from the flu include young children, the elderly, pregnant women, and people with certain conditions, such as cancer, HIV/AIDS, heart disease, stroke, asthma, and diabetes.

The burden of seasonal flu in the United States varies widely from year to year, depending on which viruses are circulating, when the season starts and finishes, how well the vaccine is working, and how many people have it.

The Centers for Disease Prevention and Control (CDC) advise everyone aged 6 months and older in the U.S. receive a flu shot every year to prevent the spread of seasonal flu.

In the new study, the researchers assessed flu virus in 142 individuals who were confirmed to have influenza. They took samples from each participant during the first 3 days after their symptoms emerged.

To collect the exhaled breath samples, the researchers invited the participants to breathe normally into a cone-shaped aerosol sampler for 30 minutes while they recited the alphabet once at 5, 15, and 25 minutes. They collected two types of aerosol samples: coarse and fine.

Of the 23 fine aerosol samples collected during normal breathing without coughing, the analysis showed that 11 samples — or nearly half — contained detectable traces of viral RNA, including eight with infectious virus. This suggests that normal breathing is a considerable contributor to aerosol shedding of flu virus through exhaled breath.

Also, the participants did not sneeze very much, and when they did, the sneezes were not especially associated with greater presence of viral RNA, either in coarse or fine aerosol samples. This suggests that sneezing is not a big factor in aerosol shedding of flu virus through exhaled breath.

From these results, the researchers conclude that “sneezing is rare and not important for — and that coughing is not required for — influenza virus aerosolization.”

“We found that flu cases contaminated the air around them with infectious virus just by breathing, without coughing or sneezing.”

They suggest that their findings could help to improve computer models that analyze risks of flu transmission through airborne means. This could eventually also improve the effectiveness of influenza public health initiatives to control and reduce pandemics and epidemics.

The results also suggest that improving ventilation in offices, schools, and other public places — such as subway cars — might also help to reduce the spread of flu.

The following video from the University of Maryland School of Public Health sums up the study:

If you buy something through a link on this page, we may earn a small commission. How this works. A yeast infection develops when Candida fungi, which is a type of yeast, grow uncontrollably on the surface of the skin or in mucous membranes inside the body. People can develop yeast infections anywhere inside or […]

Herpes symptoms: How long do they take to show up?

Herpes is a viral skin infection caused by the herpes simplex virus (HSV). Symptoms may not appear immediately after a person contracts the virus. When herpes symptoms do appear, they can affect the genital or oral area. There are two types of HSV: type 1, which mainly causes oral herpes, and type 2, which tends […]