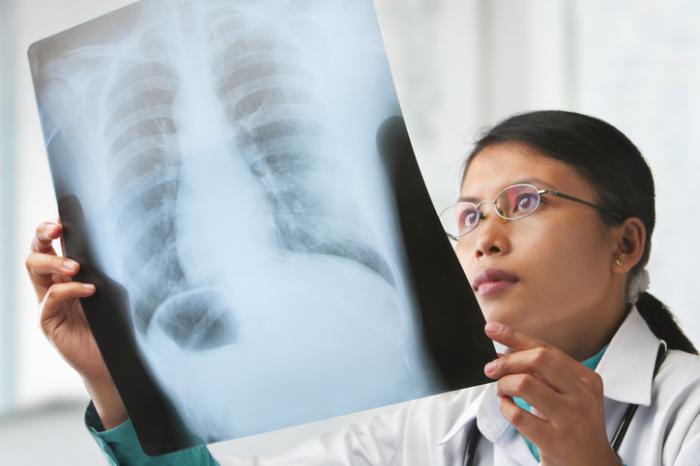 Researchers say that the study results suggest that the immunotherapy drug shows promise as a second-line treatment for malignant pleural mesothelioma, a rare and aggressive lung cancer that can result from exposure to asbestos.

Malignant mesothelioma – commonly referred to as mesothelioma – is a rare cancer that arises in the mesothelium, the thin lining of tissue that covers the inside of the chest, the heart, the abdomen, and most internal organs.

Malignant pleural mesothelioma – in which tumors form in the pleura, the linings of the chest wall and lungs – is an aggressive cancer that accounts for 90 percent of malignant mesothelioma cases. Unfortunately, most patients do not survive for longer than a year.

The main risk factor for malignant pleural mesothelioma is inhalation of asbestos, and most cases in the United States have been linked to work-related exposure to high levels of the material.

Asbestos is a naturally occurring mineral that was once commonly used to make materials for a wide range of industries, including home and commercial construction. In the U.S., many buildings erected before 1980 contain asbestos, the fibers of which can become dislodged into the air through normal wear and tear.

When asbestos is inhaled, the tiny fibers travel to the ends of the small airways and enter the pleura that line the chest wall and lungs. The fibers damage the mesothelial cells and cause scarring (asbestosis), cancer (mesothelioma), or both.

Poor prognosis and no second-line treatments

One of the reasons that patients diagnosed with mesothelioma have such poor prospects is because the disease is often not spotted until it is well advanced.

The standard treatment is first-line therapy that includes chemotherapy. There are currently no approved second-line treatments.

Researchers have looked at several other approved drugs, but the new study is the first to show promising results, as Dr. Evan Alley, lead author and chief of hematology and medical oncology at the Penn Presbyterian Medical Center of the University of Pennsylvania Health System in Philadelphia, explains:

“There have been a lot of studies looking at different drugs, but researchers have not seen positive results. But we’ve found this new class of drugs, checkpoint inhibitors, seems to be more effective than what’s been available in the past.”

Checkpoint inhibitors are drugs designed to help the body fight cancer by defeating certain mechanisms that cancer cells use to avoid being attacked by the immune system.

Some cancer cells have large amounts of a protein called PD-L1, which can bind to the checkpoint protein PD-1 on cancer-fighting T cells of the immune system. When this happens, it stops the T cell from attacking the cancer cell that the PD-L1 belongs to.

Pembrolizumab – which in the U.S. has the brand name Keytruda – is a drug that targets PD-1 and improves the immune response against cancers that are positive for PD-L1. It is already used to treat non-small cell lung cancer, melanoma, and some head and neck cancers.

In their study, Dr. Alley and colleagues use data from an ongoing multicenter international clinical trial that is testing the effectiveness and safety of pembrolizumab on patients with advanced PD-L1-positive solid tumors that have not responded to first-line treatment or for which treatment is not appropriate.

The data they assess concern 25 patients with malignant pleural mesothelioma, all over the age of 18. Upon enrolment – which started 2 years ago – patients received a dose of pembrolizumab every 2 weeks.

The results show that 14 of the patients experienced tumor shrinkage. Average overall survival was 18 months, during which around 6 months was progression-free. Since the start of the study, 14 patients have died and four were still receiving treatment as the researchers wrote up the results.

Dr. Alley sees these results as very promising: “Most patients who receive a second-line therapy have a life expectancy of about 6 or 7 months, so to have four patients still ongoing at 2 years is very encouraging.”

He adds that another encouraging result is the fact that none of the patients had to stop the immunotherapy because of side-effects. Some had to stop for a while, but they then resumed. “The drug appears to be well-tolerated,” he notes.

The common adverse reactions that the patients reported were dry mouth, nausea, fatigue, and loss of appetite.

More studies are now needed to support the findings before pembrolizumab can be considered as a second-line therapy for malignant pleural mesothelioma. Some have already started, and Dr. Alley says that there are also plans to start testing pembrolizumab with other treatments later this year.

“This study provides evidence that some patients can have long-term disease control with this drug, which we haven’t seen before. We need to better understand what we can do next to make immunotherapy more effective for more patients.”

Learn why a gene-targeting drug looks hopeful in the treatment of mesothelioma.

Genelux Corporation, a clinical-stage biopharmaceutical company focused on the development of vaccinia virus for oncolytic immunotherapy, today announced that data from two Phase I trials evaluating its lead oncolytic virotherapy GL-ONC1 in head and neck cancer and malignant pleural mesothelioma demonstrate a favorable safety profile and support further investigation of the therapy in both indications. […]

A new statistical model may help predict which patients are most likely to receive life-extending benefits from surgical treatment for malignant pleural mesothelioma (MPM), according to an article in the September 2015 issue of the Annals of Thoracic Surgery. Key points A new statistical model may help identify which patients will benefit most from surgery […]

Rates of malignant mesothelioma (MM) have levelled off in Australia, but the changing patterns of asbestos-related diseases mean clinicians must be vigilant about taking exposure histories from their patients, according to the authors of an Editorial published in the Medical Journal of Australia. “Since prohibition of the production and importation of asbestos in Australia in […]