When nerve cells form in an embryo they do not start off in the right place but have to be guided to their final position by navigating a kind of molecular and cellular “map” in order to function properly. In a recent research study published in Nature Communications neurobiologist Sara Wilson, Umeå University, found that during embryonic development different parts of the nerve cell are important for guiding other nerve cells into their physical positions.

“We found nerve cells do this in two ways, either acting as barriers preventing cell bodies to move further than they need to, or by acting as guides opening a corridor that the cell bodies can travel along”, she says.

The nervous system is analogous to a biological “computer” with different nerve cells forming connections that continuously send neural information around the spinal cord, brain and body and back again. Each nerve cell has a kind of “GPS coordinate” and exactly where nerve cells are physically located is very important so they can connect correctly with other nerve cells.

When nerve cells are in the wrong place neural information is not transmitted properly and it results in dysfunction and neurodevelopmental disorders such as lissencephaly, Kallmann syndrome and periventricular heterotopia. These misplacements can also happen in very common developmental disorders such as dyslexia and autistic spectrum disorders but it is not fully clear what role such misplacements play in these cases.

“Because nerve cell position is so important in normal nervous system function and dysfunction we wanted to find out how nerve cells position themselves in the first place. This study uncovered an exciting new mechanism for how this happens” Sara Wilson says.

Two of the main parts of a nerve cell are the central part (called the cell body) and a very long part like a “wire” (called the axon) that connects with and sends information to other nerve cells. It is important for both of these parts to be in the right place to get the nervous system to work properly.

The axons usually group together and form structures similar to corridors heading in a certain direction. Using genetic changes in mouse embryos to disrupt these axonal corridors (make them head in a different direction), her research group at Umeå Centre of Molecular Medicine, now at the Department of Molecular Biology, Umeå University, found that cell bodies from nerve cells also end up in the wrong place.

“This is the first time that axons have been shown to act as barriers and it could have important implications for understanding how the nervous system forms in all animals, including humans” Sara Wilson concludes.

Overall, this work and other work from the group focuses on understanding the mechanisms (genetic, cellular and molecular) of how the precise “anatomy” of the nervous system first forms and how that influences neuronal function and dysfunction. This basic science research has important medical implications for understanding the cause of some neurodevelopmental disorders: For example do the genes that are associated with such disorders generally control cell body guidance and is that what leads to dysfunction?

“It can also give clues as to how to grow axons during regeneration following damage or disease of the nervous system. Can we “force” regenerating neurons to connect properly? In the future, we plan to continue this basic research and find medical research teams to collaborate with to see if our findings are beneficial in these medical contexts” Sara Wilson says. 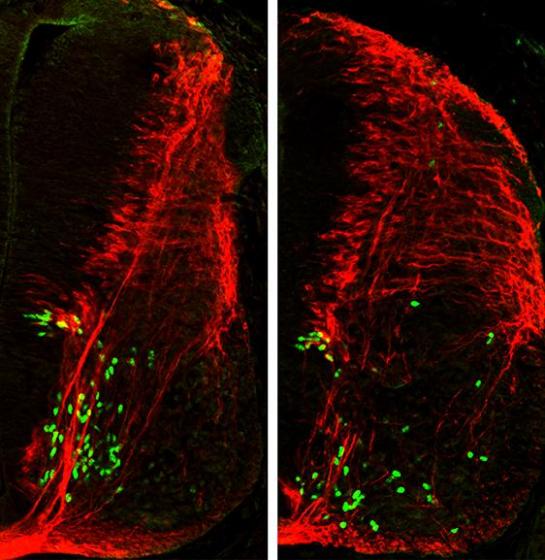 Axons in red and neuronal cell bodies in green show cell bodies following the red axons in the normal embryo (left) and when the axons are misplaced in the right image the cell bodies move to the wrong place too.
Credit: Photo: Christophe Laumonnerie

UK dyslexia charities should give a more balanced account of the evidence for coloured overlays and lenses in dyslexia say experts on thebmj.com today. Between 3-6% of children in the UK have substantial difficulties learning to read, a condition often referred to as “dyslexia.” They are at high risk of educational underachievement, explain consultant ophthalmologist […]

Bournemouth University lecturer Dr Julie Kirkby is investigating the significance of copying and note-taking in the classroom and how it affects the learning of Dyslexic children. The British Dyslexia Association states that copying presents serious difficulties to almost all learners with dyslexia. Three children in every classroom are dyslexic; representing approximately 1.2 million children in […]

Brain scans of Harry Potter readers yield computational model of reading Some people say that reading “Harry Potter and the Sorcerer’s Stone” taught them the importance of friends, or that easy decisions are seldom right. Carnegie Mellon University scientists used a chapter of that book to learn a different lesson: identifying what different regions of […]