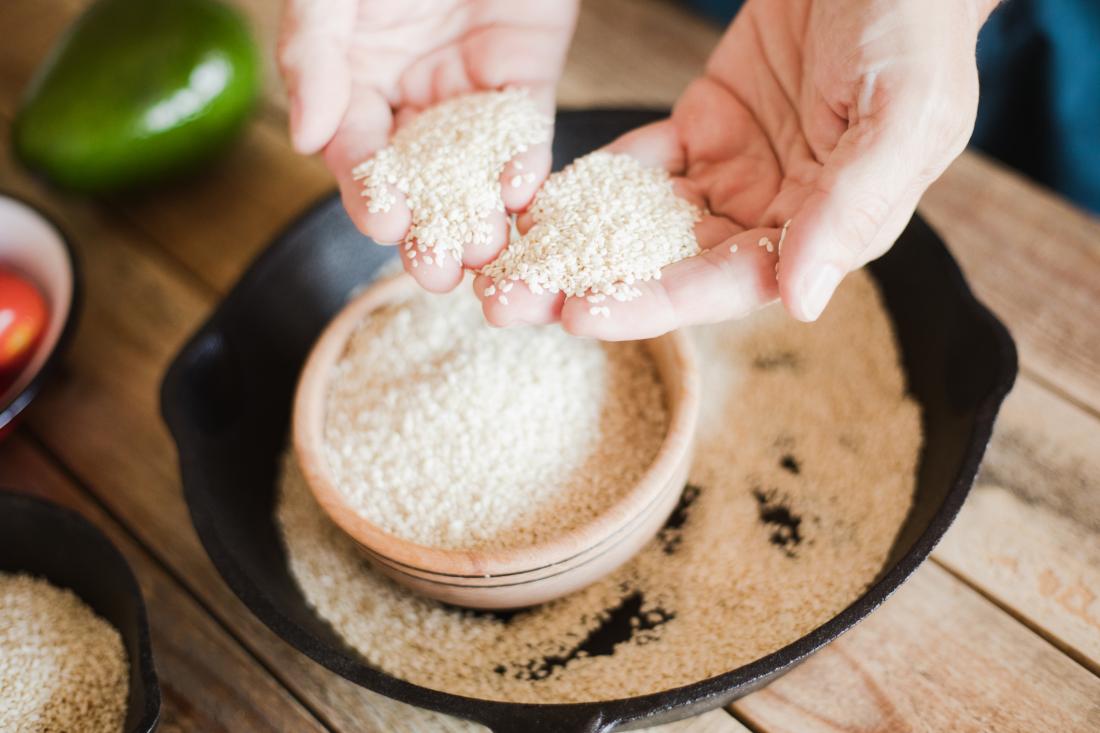 New research suggests that the number of people living with sesame allergy in the U.S. is much higher than previous estimates.

The analysis reveals that sesame allergy affects more than 1 million adults and children in the U.S.

Sesame allergy can arise in children and adults alike. In that sense, the allergy differs from other food allergies, such as milk and egg, which typically start early in life and often fade in the teenage years.

The study, which features in the journal JAMA Network Open, is the first to estimate the nationwide prevalence of sesame allergy.

“Our study,” says Ruchi S. Gupta, a professor of pediatrics and medicine at Northwestern University Feinberg School of Medicine, “shows sesame allergy is prevalent in the U.S. in both adults and children and can cause severe allergic reactions.”

Sesame seed comes from the Sesamum indicum plant. The food industry values sesame seed as a raw or roasted ingredient, and also for its oil.

The seeds are present in many baked goods, such as bread, bagels, crackers, and cakes.

Sesame seeds also feature in sweets, and Asian, East African, and Indian cuisine. Hulled sesame seed is a key ingredient of tahini, a traditional Middle Eastern paste that itself is an ingredient of other foods.

The world’s biggest producers of sesame seed are Myanmar (Burma), India, and China. The U.S. also grows sesame, mainly in the south.

Currently, U.S. federal regulation does not require food labels to identify sesame as an ingredient. This is not the case in other countries, such as Australia and those within the European Union.

The 2014 Food Allergen Labeling and Consumer Protection Act requires product labels to specify whether their contents include any of these major allergy causing foods. The requirement also covers proteins that may have originated from those foods.

Prof. Gupta and her colleagues argue that their findings make a case for the FDA to add sesame to the list.

To have a food allergy is to live with the constant knowledge that accidentally eating the wrong food could lead to a life threatening reaction. There is no cure for food allergy, so the only way to stay safe is to avoid the foods that trigger allergic reactions.

In the U.S., life threatening reactions to food allergens affect thousands of people and claim around 20 lives every year.

Food allergy reactions can result in very severe symptoms that include facial swelling, hives, wheezing, vomiting, and shock. They can also result in death.

Immunoglobulin E (IgE) antibodies in the immune system detect the allergens and then trigger the release of inflammatory molecules. The inflammation produces symptoms that usually affect the skin, nose, throat, or lungs.

There are different IgE antibodies for different allergens.

“Food allergy is a serious health issue in the U.S,” notes Prof. Gupta and her colleagues in their study background. They cite estimates that suggest around 8% of children and 10% of adults in the U.S. are living with food allergies.

The study and its main findings

For the new research, the team analyzed responses to a nationwide telephone and web survey that yielded data on more than 80,000 adults and children.

In addition to the usual demographics, the data included detailed information about suspected food allergens, specific symptoms, and clinical diagnoses.

The data revealed that more than 1.5 million adults and children (0.49% of the U.S. population), reported having a current sesame allergy.

A more rigorous analysis found that 1.1 million people (0.34% of the U.S. population) reported either having received a diagnosis of sesame allergy from a doctor or a history of sesame allergy symptoms that “met symptom-report criteria for convincing IgE-mediated allergy.”

The researchers also found that many people who reported having a current sesame allergy or severe allergic reactions are not seeing a doctor to diagnose the condition.

The researchers also found that it is very common for people with a sesame allergy to have another food allergy as well. This appeared to be the case in around 80 percent of those with sesame allergy.

“It is important to advocate for labeling sesame in packaged food. Sesame is in a lot of foods as hidden ingredients. It is very hard to avoid.”

How plant based diets can help people with rheumatoid arthritis

Dementia risk higher in those who eat more trans fats

A new study of older adults in a Japanese town has found that those whose blood contained higher levels of trans fats were more likely to develop dementia than those with lower levels. Sweet pastry can be a rich source of trans fats, which may raise the risk of dementia in some people, according to […]