A multi-institutional research team has estimated for the first time the number of children born with Down syndrome each year in Massachusetts over the past century, along with the numbers of pregnancies of a child with Down syndrome lost to either termination or miscarriage. Their report receiving advance online publication in the journal Genetics in Medicine is a follow-up to a 2015 paper describing such estimates on a nationwide level. 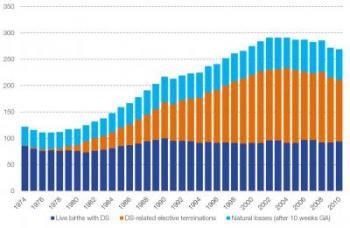 “With recent rapid advancements in prenatal testing, the public has been debating the ethical dimensions of testing. And as more expectant couples learn they may have a child with Down syndrome, the need for services like genetic counseling and family support will increase,” says Brian Skotko, MD, MPP, of MassGeneral Hospital for Children, co-director of the Massachusetts General Hospital Down Syndrome Program and senior author of both studies. “Without quality data, we can’t have informed discussions as a society or plan for future needs. These papers provide data so that discussions can be rooted in real-world numbers.”

While prenatal screening for Down syndrome and other genetic diseases has been available since the early 1970s, only around 2 percent of pregnant women choose to have invasive tests like amniocentesis or chorionic villus sampling. A new, noninvasive method of prenatal screening for Down syndrome and other genetic diseases, which involves only a blood test, is likely to significantly increase prenatal diagnoses of these conditions. The 2015 study, published in the American Journal of Medical Genetics Part A, was conducted to provide a baseline reflecting national numbers of children with Down syndrome and the effects of elective terminations after prenatal testing prior to the 2011 introduction of the new test called cell-free fetal DNA screening.

Among the findings of that study were that around 1 in 792 infants — 12.6 per 10,000 — born in 2010 nationwide had Down syndrome, reflecting about 5,300 babies born each year, and that around 3,100 pregnancies were terminated after prenatal diagnosis. There were both regional and racial/ethnic cultural differences in terminations — with higher numbers in the Northeast and Hawaii or among Asians/Pacific Islanders, and the lowest number in the South or among Hispanics and Native Americans. While estimates of the number of children born with Down syndrome from the beginning of the 20th century were based on numbers of births by age of mother, since maternal age is the only clear risk factor for Down syndrome, the development of prenatal screening and other services in the 1970s led to a divergence between the number of expected and actual births with Down syndrome as a result of terminations.

Like the 2015 study the current investigation drew on several robust available datasets. For the period prior to 2000, the investigators applied the percentages by which U.S. live births with Down syndrome were reduced as a result of elective termination to their calculations for Massachusetts. For 2000 to 2010 they analyzed data from the annual reports of the Mass. Birth Defects Monitoring Program and again estimated terminations based on the difference between expected and actual births with Down syndrome, adjusted for the probable incidence of miscarriages.

As in the nationwide study, the number of expected Massachusetts births with Down syndrome paralleled the overall fertility rate, with adjustments for the number of pregnancies in older mothers. That number has increased since the early 1980s as more women have postponed motherhood — a trend that is even more evident in Massachusetts, which has a higher percentage of highly educated women. The estimated birth prevalence of 2010 births with Down syndrome in Massachusetts was around 1 in 810 or 12.4 per 10,000, slightly lower than the national incidence.

The estimated 2010 reduction in the number of Massachusetts births with Down syndrome as a result of terminations — a figure called the reduction rate — was 49 percent, significantly higher than the national estimate of 30 percent but similar to percentages other studies have reported in Australia (55 percent) and the U.K. (48 percent). The greater incidence of termination may reflect both the regional differences noted in the national study and the fact that Massachusetts has a greater number of older mothers, who are more likely to have prenatal screening because of their higher chances of pregnancies with Down syndrome.

“In recent years several initiatives have been established in our state – including the Massachusetts Down Syndrome Congress, which provides support and information to new and expectant parents, and the prenatal clinic here at the MGH Down Syndrome Program — to ensure that expectant couples can make informed decisions on their pregnancies,” says Skotko, who is an assistant professor of Pediatrics at Harvard Medical School. “We don’t yet know how the availability of highly accurate, noninvasive screening will impact those decisions, but we will continue to provide parents with the most accurate and complete information that is available.”

What are the risks of using castor oil to induce labor?

What to know about rib pain during pregnancy

What to know about spotting in early pregnancy