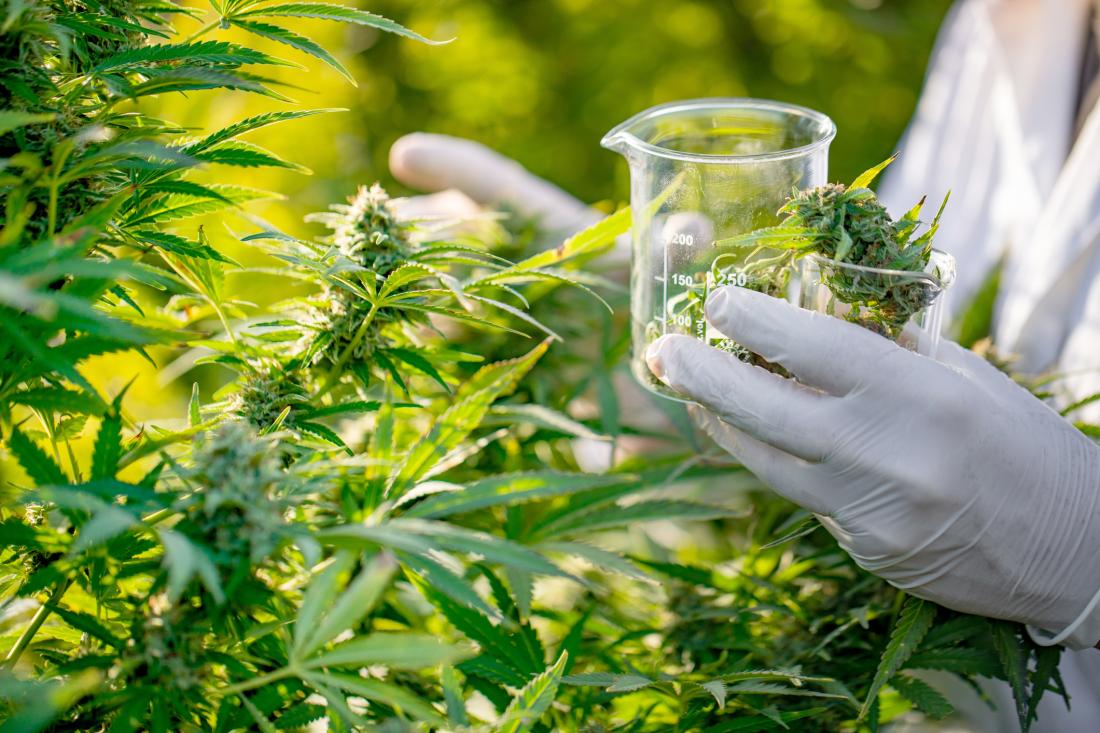 A synthetic version of the CBD that cannabis contains has the potential to become a safe treatment for seizures, new research reports.

The chemical structure of the synthetic cannabidiol (CBD), which has the name 8,9-dihydrocannabidiol (H2CBD), is similar to that of the CBD that occurs naturally in the plant Cannabis sativa.

Researchers at the University of California, Davis (UC Davis) and the University of Reading in the United Kingdom have shown that H2CBD can be just as effective as cannabis-derived CBD in treating rats with chemically-induced seizures.

In a Scientific Reports paper on the study, the investigators describe how both compounds reduced the severity and frequency of seizures to the same extent.

“[H2CBD is] a much safer drug than CBD with no abuse potential and doesn’t require the cultivation of hemp,” says lead study author Mark Mascal, who is a professor in the Department of Chemistry at UC Davis.

He and his colleagues explain that the use of cannabis as a “treatment of last resort for some cases of refractory epilepsy” was one of the most pressing medical arguments for legalizing marijuana.

Cannabis and CBD for treating epilepsy

Epilepsy is a general term for various brain conditions that give rise to seizures.

According to the most recent estimates from the Centers for Disease Control and Prevention (CDC), there were 3.4 million people, including 470,000 children, with epilepsy in the United States in 2015.

People have used cannabis to treat seizures for hundreds of years.

However, it was only just over 20 years ago that scientists discovered the endocannabinoid system, and how its interaction with cannabis compounds affected nerve cells in the brain.

Of the 100 or so cannabis compounds that interact with the endocannabinoid system, there are two major players: delta-9-tetrahydrocannabinol (THC) and its less intoxicating relative, CBD.

Because of the intoxicating effects of THC, medical research on the therapeutic use of the compounds has tended to concentrate on CBD, which does not “cause a high.”

The Food and Drug Administration (FDA) have approved an extract of herbal, or plant-derived, CBD for the treatment of certain seizure conditions.

Advantages of synthetic over herbal CBD

However, herbal CBD is not without its disadvantages. The researchers discuss these, and the benefits of an effective synthetic CBD, in their study paper.

A disadvantage of herbal CBD is that because it comes from cannabis, many countries class it as a controlled substance. On the other hand, because H2CBD is synthetic, its use could avoid many of the legal problems that generally arise with trying to use cannabis products.

In contrast, chemists can synthesize H2CBD in the laboratory using inexpensive, noncannabis chemicals. They can also purify H2CBD more easily than plant-extracted CBD.

Also, it is not difficult for people to convert herbal CBD into THC, and the chemicals for doing it are readily available. However, as Prof. Mascal explains, “there is no way to convert H2CBD to intoxicating THC.”

The team is already planning animal studies to evaluate H2CBD, after which, they intend to move rapidly into clinical trials.

UC Davis have also applied for a provisional patent for the use of H2CBD and derivatives in the treatment of seizures. Prof. Mascal, in the meantime, has set up a private company to press on with developing the drug.

Sudden unexpected deaths in epilepsy have stumped researchers for decades. According to a new study, seemingly harmless acid reflux might offer some clues. A new study investigates how the larynx (pictured) may be involved in SUDEP. According to the Centers for Disease Control and Prevention (CDC), an estimated 3.4 million people in the United States […]

To the brain, sleep deprivation is ‘like drinking too much’

New research confirms that lack of proper sleep has a severe impact on how the brain functions, with potentially dangerous consequences arising in daily life. Share on PinterestSleeplessness slows down our brains, which affects how we perceive stimuli. This may put us in dangerous situations. Lately, many studies have focused on how sleep affects the ways in […]

Scientists have developed a high-tech bracelet called the Nightwatch, which detects 85 percent of all severe nighttime epilepsy seizures — a much higher percentage than similar devices on the market today. A new type of wearable technology may help prevent epilepsy-related deaths. Smartwatches are gaining popularity, and they often help users monitor their health in […]