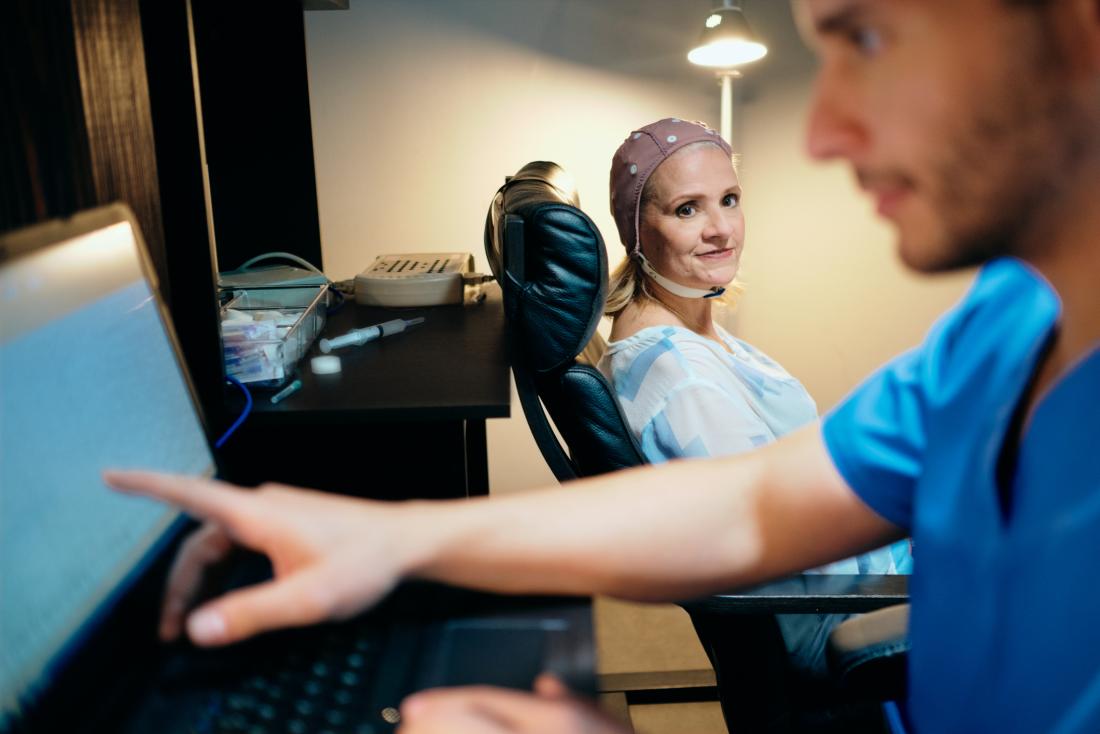 Parkinson’s disease affects more than 10 million people worldwide, according to the Parkinson’s Foundation, but no scan has been proved to definitively diagnose it.

Instead, a neurologist will assess a person by asking them to carry out certain tasks. These may include writing or drawing, walking, and speaking.

They will also examine the face and limbs to check for signs of tremors and facial expression difficulties.

As diagnosis is currently rather subjective, researchers have been trying to find an easier and more scientific method. A team from the University of Oregon, in Eugene, and the University of California, San Diego, has studied the possibilities of an EEG.

An EEG records electrical activity produced by the brain via small sensors attached to the scalp. Attempts to use EEG readings for Parkinson’s disease diagnosis have not always produced the results that researchers have been looking for.

Nicole Swann, Ph.D., the principal investigator of the new study and an assistant professor at the University of Oregon’s Department of Human Physiology, says that this is because, in the past, sine waves were the focal point. These are beta waves filtered to appear rounder.

A search for sharpness

But it is the angles and sharpness of brain waves that could hold the key to detecting Parkinson’s, according to the new study’s findings, which appear in the journal eNeuro.

While working on his doctorate at the University of California, San Diego, fellow study author Scott Cole, Ph.D., realized a potential link between the disease and sharp brain waves.

Using EEG readings taken from 15 Parkinson’s patients and 16 healthy individuals, the team honed in on the unfiltered waves.

“The raw signals go up and down like sine waves but with more asymmetry,” explains Swann, adding, “The steepness — the slant — turns out to be important in Parkinson’s patients.”

Indeed, the team noticed that Parkinson’s patients who were not taking medication had a sharper peak at the top of their brain wave, compared with the bottom.

Finding that a noninvasive method such as an EEG could be a promising diagnostic tool may have important consequences for the future of the disease. The team is hoping that doctors and researchers can use the test to track changes related to Parkinson’s in the brain over the years.

“We don’t know yet whether this approach will be better, but it could provide easily obtained brain measurements that would be helpful and possibly used in tandem with clinical observations and other EEG measurements,” notes Swann.

Changing the course of treatment

The EEG method could also have an effect on treatment. Currently, doctors can prescribe medication or implant an electric stimulator into the brain.

“If there were real-time measures of how effective treatments are at reducing the negative symptoms of Parkinson’s disease, treatments could be adjusted in real time,” says co-author and University of California neuroscientist Bradley Voytek, Ph.D.

“In the case of an invasive brain stimulator, this might mean only applying electric stimulation when it’s needed.”

“In the case of pharmacology, it would mean adjusting a drug’s dose, much like continuous glucose monitoring done by an implant can signal a pump to adjust insulin levels as needed.”

For the researchers, a bigger study examining EEG data, medical histories, and self-reports from patients is on the cards.

If the results prove to be consistent, people with Parkinson’s could eventually carry out their own EEGs at home, sending the data straight to a neurologist for immediate analysis.

The only issue with this, notes Voytek, is that obtaining the right brain waves is not easy to do in a home environment. Further research will prove whether this, too, can be changed.

How ultrasound could help curb Parkinson’s

There are two major stumbling blocks to developing effective drugs for Alzheimer’s, Parkinson’s, and other diseases that destroy the brain. The first is overcoming the blood-brain barrier, and the second is delivering the drug to a precise location and ensuring that it does not spread to the rest of the brain. New research finds a […]

Looking for links between Parkinson’s and bipolar disorder

A new systematic review and meta-analysis ask whether bipolar disorder is associated with developing Parkinson’s disease. Although the authors conclude that there is a link, it is a tough question to unpick. Share on PinterestA recent study examines the links between two conditions that appear at opposite ends of life. Bipolar disorder (BD), which people […]