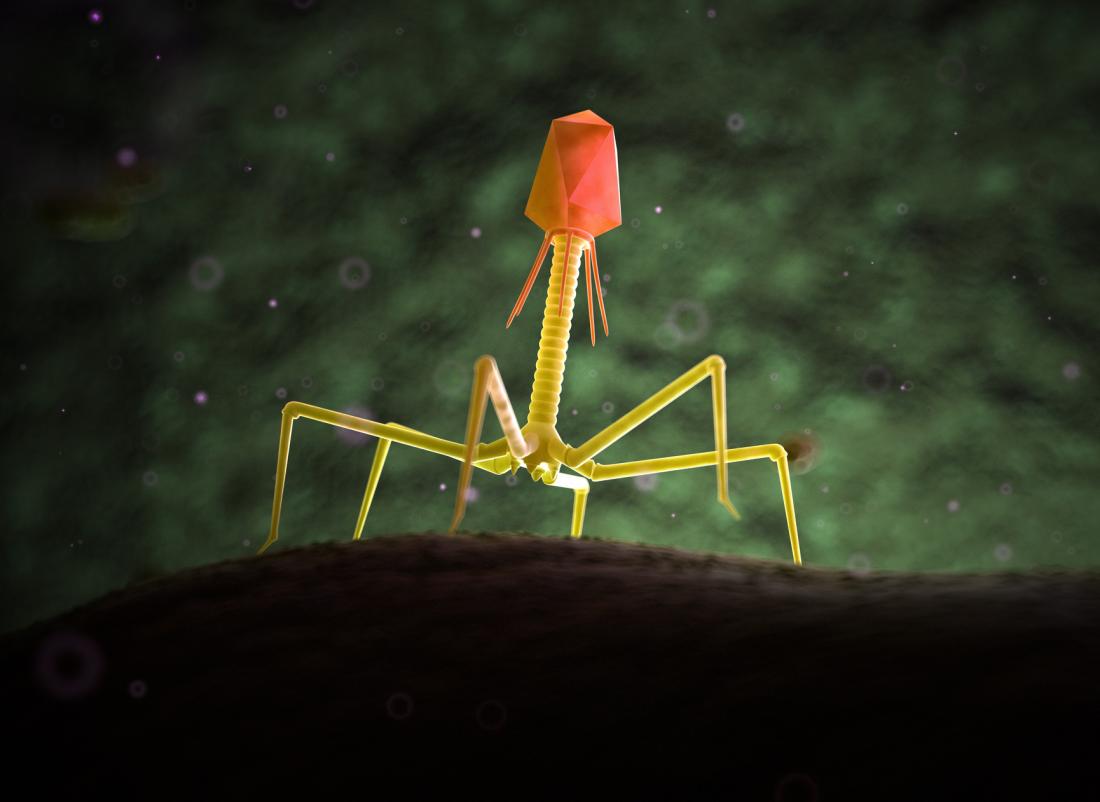 Bacteriophages (depicted above) are viruses that can infect and destroy bacteria. Could they hold the answer to antibiotic resistance?

The recent publication of several scientific reports suggesting that many bacterial strands are developing resistance to antibiotics points to the emergence of a global crisis.

As more and more dangerous bacteria become unresponsive to strong antibiotics, researchers have started looking for alternative means of fighting these “superbugs.”

Recent studies have investigated the usefulness of some surprising therapies against antibiotic-resistant bacteria, including using a specific bacterium that lives in Irish soil and experimenting with new drug combinations.

Now, researchers at the University of Pittsburgh in Pennsylvania and the Howard Hughes Medical Institute (HHMI) in Chevy Chase, MD, provide evidence that a different approach can offer an effective way of fighting off dangerous bacterial infections.

Prof. Graham Hatfull, who works at the University of Pittsburgh and at the HHMI, and his team have been studying a type of biological infectious agent called “bacteriophages,” or simply “phages.”

Bacteriophages — a name that literally means “bacteria-eating” — are viruses that target, infect, and destroy different strains of bacteria. Previous research co-authored by Prof. Hatfull suggests that there are an estimated 1031 bacteriophage particles on the planet.

Different phages target different bacterial strains, however. For this reason, identifying which agent matches which bacterium can be challenging trial and error task.

Using bacteriophages to fight off infections, an approach called “phage therapy,” is by no means a new idea. In fact, this notion has been on researchers’ radars for close to 100 years.

British, French, and Russian scientists were already experimenting with phages in a clinical setting at the beginning of the 20th century.

However, scholars explain that the initial enthusiasm regarding the potential of phage therapy fell flat for many years. This was, in part, due to the limited knowledge and scientific resources available to researchers at that time.

Now, though, the interest in phage research may be reemerging in full force thanks to one recent therapeutic success.

Prof. Hatfull and team explain — in a study paper that appears in the journal Nature Medicine — that, by using carefully selected phages, they were able to treat a severe infection experienced by a 15-year-old patient with a complex medical history.

The patient had cystic fibrosis, an incurable genetic condition that causes a buildup of thick mucus, especially — though not only — in the lungs. This, in turn, leads to susceptibility to infections.

In 2017, they presented at Great Ormond Street Hospital (GOSH) in London, United Kingdom, to undergo a double lung transplant.

However, not long after the procedure, the patient’s doctors noticed that the surgery wound looked red and raw, that they had a liver infection, and that several nodules had formed on their body. Those nodules contained bacteria that were trying to “surface” through the skin.

The scientists collaborated with the doctors at GOSH to look for bacteriophages that would attack the specific bacterial strains infecting the 15-year-old patient in question as well as another young person with cystic fibrosis. The other patient had also undergone a double lung transplant and had a severe infection.

The researchers responded to the doctors’ appeals; the two young patients did not respond to any of the antibiotics they received.

These infections, the researchers note, were not new; the patients had first developed them many years before but had kept them under control until their surgeries, when they flared up dangerously.

“These bugs didn’t respond to antibiotics. They’re highly drug-resistant strains of bacteria,” says Prof. Hatfull. So, he explains, the scientists decided to try “[using] bacteriophages as antibiotics — as something we could use to kill bacteria that cause infection.”

Prof. Hatfull’s main interests are the study of phages and the treatment of tuberculosis (TB), which is a bacterial infection that mainly settles in the lungs. His London-based colleagues got in touch because, as it happened, both of their young patients had infections caused by strains of Mycobacterium, which is also involved in TB.

The doctors sent Prof. Hatfull samples of the bacterial strains responsible for the patients’ infections so that he and his collaborators could identify which phages would be able to attack and destroy them.

Within a few months, they found the set of phages that could match the bacteria infecting one of the patients. However, this initial discovery came too late; the patient had died earlier that same month.

When it came to identifying the phages that may be able to help the 15-year-old patient, the search was not so smooth. To begin with, the team found three potentially useful bacteriophages. However, it turned out that only one was effective in infecting the targeted bacteria.

The solution that Prof. Hatfull and team then came up with was to modify the genomes of the two less effective phages to render them fully effective against the bacteria they needed to attack.

Once they identified a mix that was both effective and safe, they liaised with the doctors, who then administered it to the patient twice daily. Each dose contained a billion phage particles.

After 6 weeks of this innovative treatment, the doctors saw that the patient’s liver infection had all but disappeared. Currently, the physicians report that only a couple of the telltale nodules remain.

Prof. Hatfull and his team are especially pleased about the fact that the bacteria they targeted have not, so far, developed resistance to the phages the researchers used to attack them. This means that this approach may be one that doctors could continue to use in treating severe, resistant infections.

Nevertheless, the scientists note that it remains challenging to identify the right phage mix to treat individual bacterial infections. Much work is yet to be done in terms of finding the best phage therapies.

“We’re sort of in uncharted territory.”

Clostridioides difficile is a form of bacteria that typically infects patients in hospital environments after they have received antibiotic therapy that has upset the bacterial balance in their guts. New research explains how this bacterium is evolving and suggests new ways forward in prevention and therapy. C. diff. may have evolved in line with the […]

What to know about nitric oxide supplements

A powerful class of antibiotics provides life-saving relief for people with cystic fibrosis; however, a new study for the first time reveals the levels at which high cumulative dosages over time significantly increases the risk of permanent hearing loss in these patients. Cystic fibrosis, or CF, is an inherited chronic disease that affects the lungs […]